Last November, I happened across an extremely brief mention of an upcoming quad driver, universal-fit IEM from Nuforce. The tiny little blurb, part of a much longer show report on a Japanese audiophile website, surprised me because I would have never expected Nuforce to work on a high-end IEM project.

It’s not that Nuforce is brand new to in-ears; they’ve been making earphones for a good number of years, but they have all come at the sub-$100 price envelope. Sure, while it’s not as shocking as seeing, say, Skullcandy embark on the same path, but to suddenly jump from the budget segment to the $400+ segment is unexpected for any company — it’d be just like Samsonite suddenly deciding to take on Louis Vuitton.

Nuforce would have to sink or swim with this project; they’d thrust themselves into the premium earphone market and the Primo 8 was going to have to compete against some of the most well-established and respected names in the in-ear business — Westone, Shure, and Ultimate Ears. Tooling brand new earphone shells, fabricating cables, and packing accessories for the premium market are not trivial tasks for any company new to the dance. Australian upstart Audiofly has had a world of troubles bringing their Performance Series of IEMs to the market. So if Nuforce hoped to make a splash, they better have had something interesting up their sleeves.

Fast forward a few months, and the Primo 8 was finally ready to meet the public. Nuforce had an office in Taipei, where I lived, and thus I was able to get two separate listens to the Primo 8.

The Primo 8 comes well-packaged in a premium box set commensurate in quality to what you’d expect from something that rings up at $500. The Primo 8 is packed in dense, high-quality foam that fears no bump or fall. The inside flap of the box details the various technological features of the Primo 8. Out of its immediate competitors, only manufacturers making $1000+ products take this kind of care with the packaging. 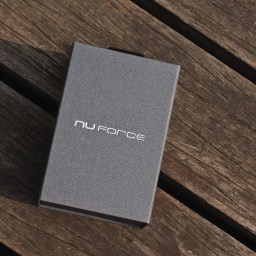 A large array of accessories.

Lachlan did a nice little unboxing of the Nuforce Primo 8′s package:

He further did a ThingCast discussion regarding the earphone
(for the first twelve minutes or so):

(He’ll also have a full video review coming in the following weeks, giving us a different voice of opinion.)

The design of the Primo 8 is a departure from typical Nuforce styling (i.e. minimalist and angular with flat, matte surfaces), and now harks a more “flowy” look. Color is an iridescent, metallic blue that looks fairly handsome in person, but is difficult to photograph well — hard light overwhelms the iridescence, while soft light obviates the aesthetic purpose of the ridges.

The deep ridges help break up the otherwise smooth surface of the concha bowl shell to lend a more interesting look to the aesthetic topology. Perhaps unflatteringly, at some angles, the Primo 8 does in fact at times resemble a miniature bicycle helmet, but close handling and inspection allow for a deeper appreciation of the complexity of the shell design.

I am most struck by the blue — its specularity is perhaps as alluring a look as I’ve seen in earphones, and despite its flat finish, manages to call upon the depth of a certain piece of work by Miles Davis.

The Primo 8, up close, actually looks more interesting than similar offerings from Westone and Shure. The smooth shell of the SE846 manages to look positively prosaic next to that of the Primo 8.

However, as is the case with any design endeavor, beauty is in the eye of the beholder and some people might just prefer the simpler, ultra-utilitarian look of a Westone or Shure.

The Primo 8 is designed with an ergonomically-friendly, classic, concha bowl-fitting shape. It is designed to nestle neatly in the recesses of the cavum conchae of your ears. When viewed from a head-on perspective, you’ll find that the nozzle stem of the earphones cant at an angle slightly upward. This is a welcome ergonomic feature, as most ear canals intersect the vertical plane of the ear this way. Thus, when worn, the Primo 8 feels comfortable and natural.

The shells of the earphone are plastic, but feel quite sturdy, presumably fabricated from some kind of polycarbonate material. The absolute size of the housings is not the smallest around; it is slightly wider than the Westone W40 and is actually most similar in its dimensions to Shure’s SE846, but can hardly be classified as large. The vast majority of users should have no problem achieving an optimal fit with the Nuforce Primo 8.

I took the Primo 8 on all forms of mass transit (e.g. subway, light rail, high-speed rail, tour bus), and it excelled in comfort and isolation in all circumstances — when paired with the right tips. I found that isolation was sub-par (compared to the perfect fit and isolation of custom-fit IEMs) with the included single-flange silicone ear tips, but with Comply tips, it isolated as well as any Shure, Westone, UE earphone that I’ve heard. It doesn’t give you the kind of isolation that a deep-fit Etymotic design will give you, but the trade-off in isolation for better comfort is a plus.

Aside from the Comply tips (two pairs) bundled with the Primo 8, only single-flange silicone tips are included. In my opinion, they should have perhaps included a larger fit kit, with double-flange tips and other types of loose foam tips to allow users to get an optimum fit. For me, the best isolation was only achieved when I used a special pair of double-flange tips with the Primo 8. Interestingly, these tips also managed to enhance the sound signature of the earphone (for my personal preferences).

Nuforce chose the MMCX connector for its cable, which is business-wise — the correct choice. They’re easier to make, easier to fix, and easier to replace. It’s obvious that, with Shure, Westone, and UE all moving over to MMCX, the industry is firmly in this camp for removable cables.

MMCX is the inveterate IEM user’s nightmare, however. It swivels, round and round and round and round. Fortunately and ingeniously, Nuforce have devised a detent system that helps keep its cables in place without too much fuss. The solution is small and primitive, but definitely works.

Should you necessarily be exchanging cables all the time, though? No.

The MMCX connector is only designed for a finite number of pulls and removals before it develops intermittent contact issues, so swap out your cables as sparingly as possible.

Uniquely, the cable included with the Primo 8 is a proprietary design. Whereas most cables are the standard twisted bundle or basic enamel-coated Litz configuration, the Primo 8‘s cable utilizes silver and copper bundles wrapped concentrically around a Kevlar silk core.

We’ll discuss how this cable impacts sound in a later section, but without getting into details right now, it does seem Nuforce didn’t select this cable merely for the sake of being different. It does work very well as a cable, and Nuforce mentioned making multiple iterations of the cable in different configurations before settling on this one.

The aesthetics of the in-line remote control and microphone are perhaps polarizing, but the large, flat-surfaced gloss black single rocker button works quite well and clicks positively. Some may object to the microphone being placed at a position as low as the Y-split instead of being at mouth level, but this design also allows people to use the neck cinch properly and wear the cable behind the head, stage musician-style, for example.

Call quality was clear via an Apple iPhone 4S. Remote control functions were also effective. However, the controls aren’t compatible with Android devices.

By default, only the cable with remote function comes with the Primo 8, but Nuforce sells a standard “dummy” cable separately.

Perhaps the weakest link of the Primo 8, the accessory kit is probably most telling of the fact that this is Nuforce‘s first rodeo when it comes to high-end IEMs. While the kit comes replete with airplane adapters, 1/4″ adapters, cleaning loops, tips galore, and even a microfiber cloth (with Nuforce Primo 8 branding, no less),  they look cherry-picked from the neighborhood Radio Shack.

Even that’s all well and good, however — my singular niggle with the Primo 8‘s accessory kit is the soft leather carry pouch. Don’t get me wrong — the pouch itself is actually of extremely high quality. It was inspired by Italian leather wallets and the genuine lambskin leather was sourced accordingly. Yet, however velvety and soft the case is, it does not provide any kind of impact protection. Regardless of whether the Primo 8 were to be transported inside a backpack, messenger bag, or attache, it would be highly susceptible to being crushed by other heavier objects.

So while a luxurious leather case is certainly very nice, it offers little by way of practicality. Considering the practical nature of the Primo 8‘s form factor (and general vibe of Nuforce), I feel that it’s a bit remiss of the firm not to include at least a semi-hard carry case, or at least a stiff protective insert for the leather case. Westone offers up their Monitor Vault. Shure has a semi-hard plastic/faux-leather case. Audiofly has a semi-hard, canvas storage box. Logitech offers a sturdy plastic case, replete with tip storage and organization. So while it’s no major infraction, it is the little things (that perhaps come with added experience) that Nuforce needs to deliberate on a bit more closely.